The 2014 Nanyang Symposium Held at XMU 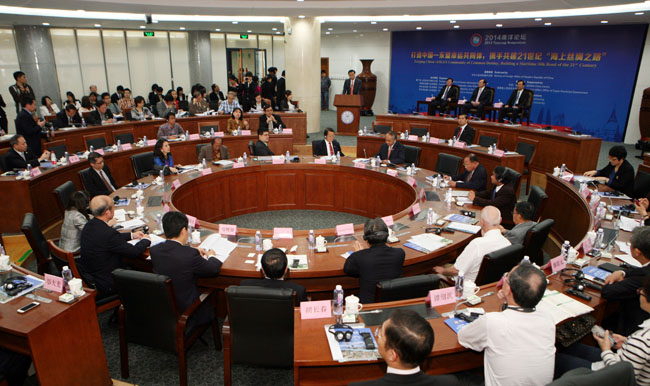 On March 29th, the “2014 Nanyang (Southeast Asia) Symposium” was held in the Science and Arts Center of Xiamen University, on the theme of “Build a China-ASEAN community, develop a 21st Century Maritime Silk Road”. The purpose of the event is to develop a high-profile, top-level platform for high-ranking officials and scholars from China and ASEAN countries to discuss opportunities and challenges of the cooperation between the two sides. Those in attendance included Liu Jianchao, Assistant Minister of China’s Foreign Affairs, Zhu Chongshi, President of XMU, Wu Daguang, Vice President of XMU, Song Kening, Director of Fujian Provincial Government Foreign Affairs Office, as well as government officials, well-known scholars and businessmen from China and ten ASEAN countries like Indonesia, Malaysia, the Philippines, Singapore and Thailand. The opening ceremony of the forum was presided over by Hong Chengzong, Director of Xiamen Municipal Government Foreign Affairs Office.

In the forum, President Zhu Chongshi said that China and ASEAN countries enjoy geographic proximity, close ties, and a long history of cultural, social and economic exchanges. Nowadays, the bilateral relationship has moved into a new stage of development thanks to their expanding and deepening cooperation on various levels and in diverse fields. He also expressed wishes that the Research School for Southeast Asian Studies at XMU and other related research institutions will grasp the new opportunities brought about by the development of both China and ASEAN countries and make new contributions to the building of “the 21st Century Maritime Silk Road” and the enhancement of all-round cooperation between the two sides.

Liu Jianchao, Assistant Minister of China’s Foreign Affairs, delivered a keynote speech entitled “Build the 21st Century Maritime Silk Road and Further Develop China-ASEAN Relationship”. He stated that the 21st Century Maritime Silk Road is an initiative in support of peace, cooperation, openness and inclusiveness, which requires concerted efforts and collaboration from both China and ASEAN countries. The two sides will jointly build the Maritime Silk Road into pursuit of harmonious co-existence, a smooth and safe link, a bridge of friendship, as well as a path to mutual benefits and continuous prosperity.

In the discussion sessions, experts and scholars explored topics centering on “regional economic integration and the interconnection between China and ASEAN” and “the building of ‘Maritime Silk Road’ and China-ASEAN maritime cooperation”. From perspectives of economic strategies, trade and investment, construction of internet, international relationship, along with history and cultures, the attendees discussed the direction for future bilateral cooperation and reached a consensus on the integration of the Asia-Pacific Free Trade Zone, broader land, sea, air and cyberspace links, as well as mutual trust in politics, cultural exchanges and security cooperation on the basis of mutual understanding and respect.

The first “Nanyang Symposium”, as a feature of the 4th Nanyang Culture Festival, is aimed at providing a platform for discussion of joint cooperation and common development between China and the Nanyang region (today’s ASEAN countries), relying on the shared history and close economic, trade and cultural relations between Fujian Province and the Nanyang region. The platform advances the partnership between China and ASEAN countries across the board. The event was jointly organized by Xiamen Municipal Government Foreign Affairs Office, together with the consulates-general of the Philippines, Singapore and Thailand in Xiamen, and co-organized by Xiamen University and Huaqiao University.