Abstract: In-memory computing provides an opportunity to meet the growing demands of large data-driven applications such as machine learning, by colocating logic operations and data storage. Despite being regarded as the ultimate solution for high-density integration and low-power manipulation, the use of spin or electric dipole at the single-molecule level to realize in-memory logic functions has yet to be realized at room temperature, due to their random orientation. Here, we demonstrate logic-in-memory operations, based on single electric dipole flipping in a two-terminal single-metallofullerene (Sc2C2@Cs(hept)-C88) device at room temperature. By applying a low voltage of ±0.8 V to the single-metallofullerene junction, we found that the digital information recorded among the different dipole states could be reversibly encoded in situ and stored. As a consequence, 14 types of Boolean logic operation were shown from a single-metallofullerene device. Density functional theory calculations reveal that the non-volatile memory behaviour comes from dipole reorientation of the [Sc2C2] group in the fullerene cage. This proof-of-concept represents a major step towards room-temperature electrically manipulated, low-power, two-terminal in-memory logic devices and a direction for in-memory computing using nanoelectronic devices. 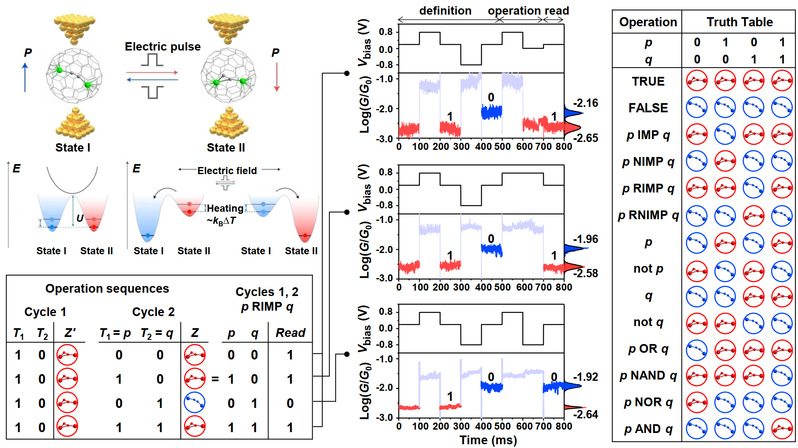