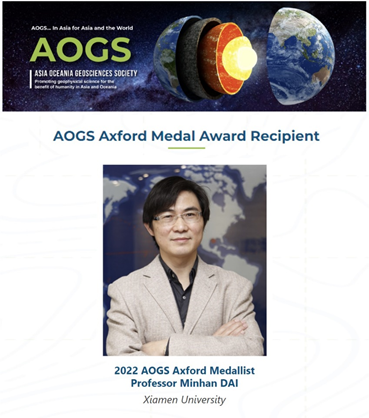 The AOGS establishes the AOGS Axford Medal in honour of Professor W. Ian Axford for his “vision of academic excellence and unselfish scientific cooperation in Asia and Oceania.” He is a distinguished scientist who was responsible for developing many fundamental theories for the structure of the magnetosphere, origin of the solar wind, and cosmic ray particle acceleration. He was also instrumental in promoting international cooperation in the geosciences in the broadest sense. The AOGS Axford Medal acknowledges an individual for outstanding achievements in geosciences, including planetary and solar system science, as well as unselfish cooperation and leadership in Asia and Oceania.

Prof. Dai is an internationally renowned marine biogeochemist devoted to interdisciplinary research on the ocean and its role in climate and environmental change. He has made outstanding contributions in ocean carbon and nutrient biogeochemistry research and demonstrated strong leadership in international cooperative research promoting ocean sustainability as well as in capacity building.

Prof. Dai is a leading scientist in international ocean carbon research. Since 2009, he has led two China Coastal Carbon Programs. Based on his work and collaborations with colleagues, the China Seas, including the South China Sea and East China Sea, are among the most studied coastal systems with regards to carbon fluxes and their physical and biogeochemical controls. He and his colleagues are among the first to report on CO2 fluxes in the coastal ocean at a global scale, and articulate a coastal carbon cycle framework in both coastal systems with large riverine inputs (River-Dominated Margins, RiOMar and those dominated by interactions with the open ocean (Ocean-Dominated Margins, OceMar), which furthers understanding of the coastal carbon cycle mechanism.

Prof. Dai has unselfishly promoted sciences and capacity building for Asian countries and regions. He was the Secretary General of the Asia Oceania Geosciences Society (AOGS) from 2010-2012, the President of AOGS’s Ocean Section from 2009-2010, and Founding President of AOGS’s Biogeosciences Section from 2012-2014. He has advised students and sponsored postdocs from Thailand, India, Indonesia and Pakistan and has organized a number of training workshops and summer schools in Xiamen which helped foster exchange with scientists, early career researchers and students from under-developed countries.