Qiang Zheng, a microbiologist at Xiamen University in southeast China, wants to know whether bacteria and other marine microorganisms can be harnessed to help combat global warming. These organisms metabolize organic matter dissolved in seawater into a form of carbon that can persist in the ocean for millennia, known as recalcitrant dissolved organic carbon (RDOC). Zheng is trying to work out whether these microbes could provide an environmentally friendly way to stash away atmospheric carbon that is pumped into the ocean, thereby helping to lessen global warming and mitigate climate change. He tells Nature about his work, as well as efforts by China’s funders and government to encourage research into solutions for climate change. 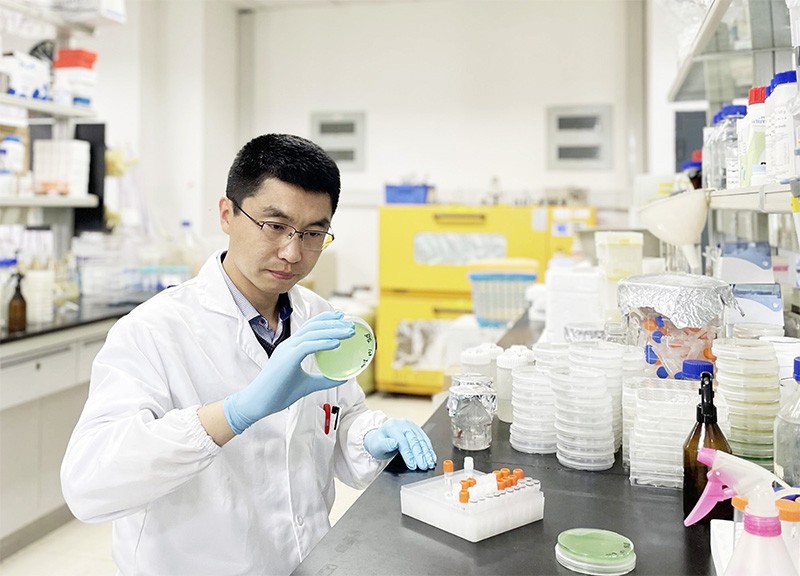 Qiang Zheng is investigating the role of microbes in oceanic carbon cycling and storage.Credit: Xiaomeng Wang

Where did the idea of a microbial carbon pump come from?

Scientists have long known that there is a large amount of carbon stored in the ocean, as much as 50 times more than in the atmosphere (see go.nature.com/3tzuogk). In 2010, my PhD supervisor Nianzhi Jiao, who also leads our research group, and others suggested the idea of a microbial carbon pump to explain the origins of this huge reservoir of organic carbon.

Our team has since found that marine bacteria consume only certain types of organic matter, including carbon, and leave out other types. Radiocarbon dating has shown that some carbon compounds have existed in the ocean for 5,000 years. We suspect that these compounds are refractory, or biologically worthless, to bacteria.

What are the next steps?

We are currently working on some field tests as we improve our theories.

For example, our laboratory experiments found that microorganisms tend to generate less RDOC in water that has large quantities of chemicals and minerals, such as those from chemical fertilizer or sewage. Specifically, fertilizer runoff in streams and rivers encourages bacterial respiration, which increases the amount of carbon dioxide released from the water, and reduces the amount stored as RDOC.

We want to test this outside the lab and measure how much carbon would be stored in coastal seawater if we limited the amount of fertilizers used by nearby farms, or reduced runoff by planting trees along the river bank, for example.

Working out exactly how these processes influence each other is the next focus of our research, and understanding their interactions will help us to design the field tests.

What challenges do you face?

At this stage, the process through which marine microorganisms turn dissolved organic carbon into RDOC is still a black box.

Multidisciplinary collaboration will help us to identify RDOC compounds and their molecular formulas and chemical structures and dig into the underlying mechanisms. Colleagues in chemistry departments can contribute relevant expertise and instruments, and those in physics and geography labs can help us to work out how the compounds move through the sea on a larger scale, looking at how changes in the chemical make-up of coastal water could affect carbon stored in deep sea water, for example.

And to turn theoretical research into real-world applications, we need policy support from local authorities, especially from the environment- and marine-related departments that can grant permission for experiments in nature, especially on a large scale.

Have you seen an increase in funding for carbon-sequestration research?

The field of ocean carbon storage has received a lot of attention, and funding opportunities have been increasing. We’ve also seen more support and cooperation from local governments in China, and from other research groups and universities.

Since 2015, many manufacturing and heavy-industry companies have asked us to help them measure how much of the carbon generated by their projects they can trap so they can participate in China’s carbon-trading market — a scheme to incentivize companies to reduce their carbon emissions. The number of requests really increased in 2020, the year before China was due to officially launch the scheme.

For example, the Lianjiang county government asked us about quantifying how much carbon it could sequester by planting trees along river banks. The China National Offshore Oil Corporation in Beijing, which emits 40 million tonnes of CO2 each year, enquired about finding ways to sequester more of its carbon emissions in the ocean.

Our lab hasn’t reached an agreement with any of them yet. We need to focus on theoretical research before we can offer to quantify companies’ sequestration.

The centre was established in December 2020. It focuses on ten research directions, including the chemical characterization and inert mechanisms of carbon compounds, and the biological and ecological mechanisms of marine carbon sinks.

The centre wants to have breakthroughs in a short period of time and is an interdisciplinary collaboration. Researchers share equipment, hold regular academic presentations and exchange ideas. Currently, its main source of funding is the university, along with some national grants. It is one of 20 similar centres set up at Chinese universities in the past 2 years or so.

Why is it necessary to establish these centres?

It’s too early to say whether it is necessary. The real effects of the centres will take time to be verified. As far as I know, many of them have received support only from their institutions and local authorities. Only a few have received national funds or policy support.

Carbon-neutrality research requires a wide breadth of expertise. These centres need to be set up at the universities and institutes that have the best experience and expertise to lead the field. If they are built in a hurry as a mere response to government policy targets, they might not deliver tangible, long-term results.