Abstract: Antibiotic resistance genes (ARGs) in municipal drinking water may not be effectively removed during centralized treatment. To reduce potential health risks, water disinfection at the point-of-use scale is warranted. This study investigated the performance of boiling, a prevalent household water disinfection means, in response to ARGs contamination. We found that boiling was more efficient in inactivating both Escherichia coli and environmental bacteria compared to chlorination and pasteurization. Boiling of environmental bacteria suspension removed a much broader spectrum of ARGs and mobile genetic elements (up to 141 genes) than chlorination (up to 13 genes), such better performance was largely attributed to a stronger inactivation of chlorine-tolerant bacteria including Acinetobacter and Bacillus. Accumulation of extracellular ARGs was found during low-temperature heating (≤ 80°C) of E. coli and at lower chlorination dosages (≤3 min). These extracellular ARGs as well as the intracellular ARGs got removed as the heating temperature increased or the chlorination time prolonged. Under the same treatment time (30 min), high-temperature heating (≥ 90.1°C) damaged the DNA structure more thoroughly than chlorination (5 mg/L). Taking into account the low transferability of ARGs after DNA melting, boiling may provide an effective point-of-use approach to attenuating bacterial ARGs in drinking water and is still worth promoting in the future. 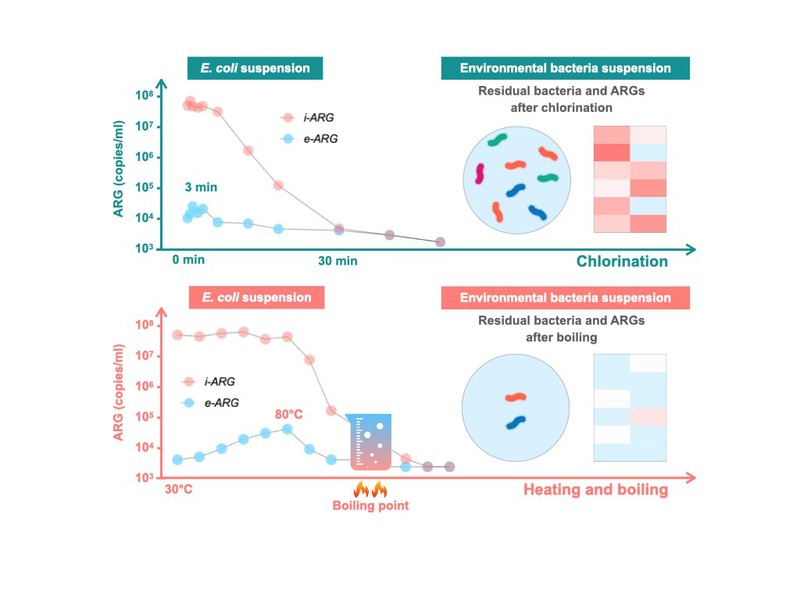