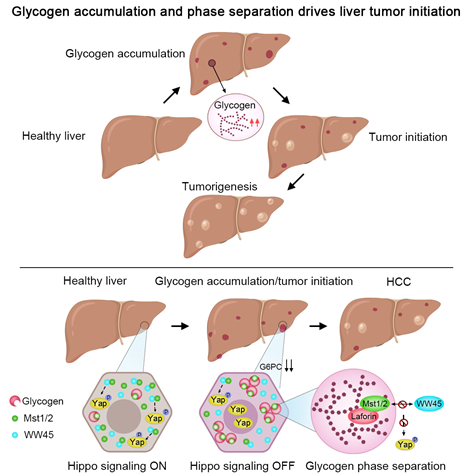 A research paper based on the results titled “Glycogen accumulation and phase separation drives liver tumor initiation” was published on the Cell website on 21 October 2021. Co-first authors of the paper are PhD students including Liu Qingxu, Li Jiaxin, Zhang Weiji, and Xiao Chen and Postdoc Researcher Zhang Shihao. Prof. Zhou Dawang and Prof. Chen Lanfen of Xiamen University are the co-corresponding authors of the paper. The research gained support from National Key Research and Development Program of China, National Natural Science Foundation of China, the 111 Project and the Fundamental Research Funds for the Central Universities of China-Xiamen University.

This paper pays special tribute to Mr. Qingxu Liu, one of the first authors, who sadly passed away on June 11th, 2020 as a result of Non-Hodgkin lymphoma. He had signed up through the Red Cross Society of China to donate his body to the University’s medical school, for the use of scientific research and education. Liu Qingxu played a vital role in initiating this project and made several critical findings on his own.