On April 5th, the Council Meeting of the University Consortium of the 21st Century Maritime Silk Road (UCMSR) was successfully held at the Science and Art Center, Xiamen University. The meeting reviewed the past achievements of the Consortium and laid out a plan for further endeavors. Mr. Liu Jian, Deputy Director-General of the Education Department of Fujian Province, Prof. Zhang Rong, Chair of UCMSR and President of Xiamen University, and over 60 presidents and representatives from 36 member universities attended the meeting on-site and online. Lisa Yu, Secretary General of UCMSR hosted the meeting. 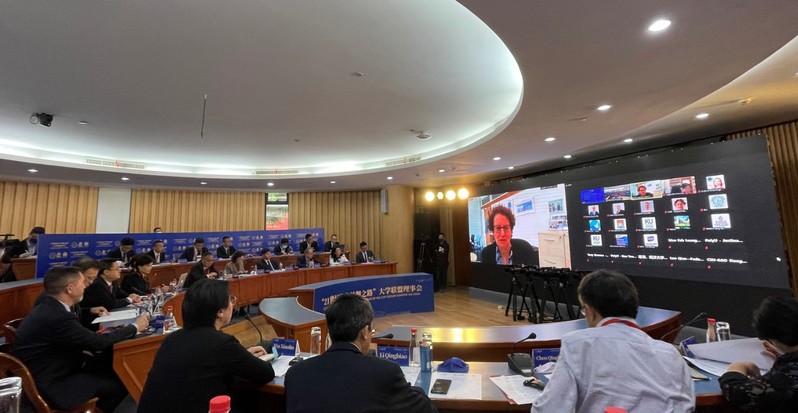 In his remarks, President Zhang Rong indicated that the Consortium upholds the Silk Road Spirit centered on “peaceful cooperation, openness and inclusiveness, mutual learning and emulation, and mutual benefit for win-win outcomes”, and has steadily increased its influence and popularity thanks to the generous support of the Education Department of Fujian Province and the active cooperation of the member universities. Regarding responses to the COVID-19 pandemic and the stable development of the Consortium, Zhang observed that firstly, we should forge ahead in line with the trend of the time and ride “the boat of cooperation” to spearhead the technological advancement and face up the global challenges; secondly, we should uphold openness and integration and establish “the bridge of cooperation” to promote internationalization and cultivation of high-level talents; thirdly, we should improve the communication mechanism and open “the door of cooperation” to pursue extensive consultation, joint contribution and shared benefits in the post-COVID era.

Mr. Liu Jian pointed out that, as an important platform and carrier for the opening up of higher education, the UCMSR leverages its strength as a higher education consortium and an academic institution, continues to improve its cooperative mechanism and carry out activities, yielding many achievements. Liu expressed that the pandemic respects no borders, and all countries are in the community with a shared future. The higher education is obliged to make its contribution to defeat the pandemic at early stage through cooperative development, mutual integration, and innovative coordination. Liu proposed that member universities should work together in delivering cooperation in epidemic control and sharing online education resources. He added that the Education Department is about to give unswerving support to the establishment and development of the Consortium so as to promote the development of higher education in relevant countries and regions, writing a new chapter of cultural exchanges and mutual understanding.

In the meeting, Dr. Wang Huiyao, Founder and President of Center for China and Globalization (CCG), delivered a keynote speech on the topic of “Establish the Multilateral Governance Mechanism of BRI, Found the BRI University”. He introduced the new achievements of BRI, proposed to shift the bilateral cooperation mechanism towards a multilateral one to promote deeper cooperation with the world, and to build “Belt and Road” Universities to strengthen people-to-people and educational exchanges with countries along the “Belt and Road”.

Lisa Yu made a review of the work of the Consortium and announced the new member, Instituto Tecnológico de Buenos Aires (ITBA) to the Consortium. To promote the scientific research cooperation, Xu Zhiduan, Professor of School of Management, Executive Director of the Research Institute for Doing Business in China, Xiamen University, as well as Ji Rongrong, Professor of Xiamen University and Deputy Director of Science and Technology Department, introduced the Research Institute for Doing Business in China and the Institute of Artificial Intelligence of Xiamen University to the participating universities respectively, hoping to carry out cooperation with member universities in fields of business environment research and artificial intelligence. The guests also exchanged their views on topics of UCMSR seminar series, collaborations with other consortiums and institutes, summer programs, addition of Vice Chairmanship, and election of the Chair.

In his closing remarks, President Zhang extended his gratitude to the trust and support of member universities for re-electing him as the chair of the Consortium. He noted that as the Secretariat, XMU will continue to support the development of the Consortium. He added that XMU boasts a profound history and influence in disciplines such as oceanography and anthropology. XMU would like to carry out cooperation in such fields as maritime scientific research, climate change, meteorological disasters and the protection of cultural heritage along the Maritime Silk Road.

Initiated by Xiamen University, UCMSR was established in October 2018 and has now included 66 member universities from 20 countries and regions. Since its establishment, UCMSR has fully mobilized internal and external resources, steadily promoted various work, and has held activities such as President’s Forum, International Summer Program and Photography Competition. In the future, UCMSR will further leverage its unique strength and stimulate its vitality to better serve its member universities.