On October 21, New Zealand Ambassador to China, H.E. Clare Fearnley, along with her delegation, visited Xiamen University and met with President Zhang Rong. 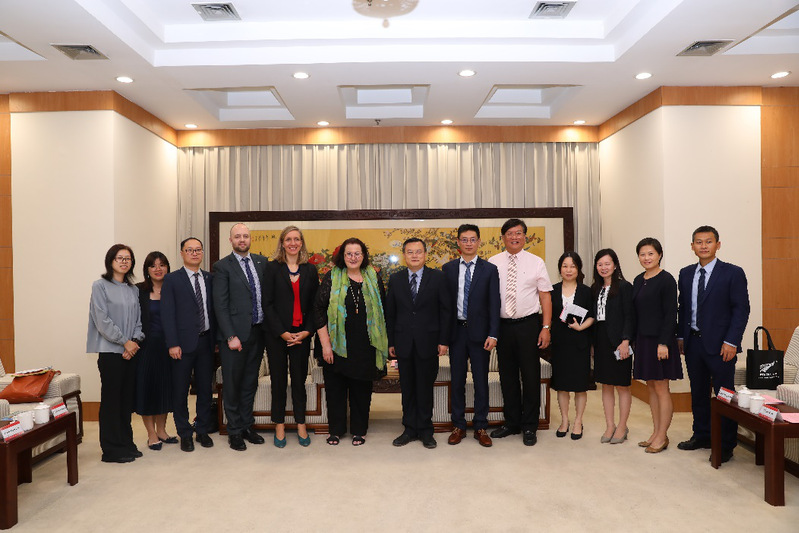 President Zhang warmly welcomed the ambassador, and introduced the history of XMU, especially its history of globalization. He pointed out that Xiamen University has always committed itself to going global, and has garnered fruitful results in exchanges and cooperation with many universities and institutions worldwide. He also mentioned that Xiamen and Wellington have bonded as sister cities, and a Confucius Institute has been jointly established by Xiamen University and Victoria University of Wellington, pushing bilateral ties to new highs. It is hoped that, with the support of New Zealand Embassy in China, the partnership between the two campuses would further develop in areas such as talent training, internationalization, academic research and cooperation in major disciplines to achieve a win-win for both.

Ambassador H.E. Clare Fearnley thanked Xiamen University for the warm welcome. She said that the establishment of the Confucius Institute by Xiamen University and Victoria University of Wellington is a gratifying outcome of people-to-people exchanges between China and New Zealand. The study of China and Chinese language education have become an area of growing importance in Victoria University of Wellington as well as other New Zealand universities, all of which have played a constructive role in cultural and educational exchanges between China and New Zealand. It is expected that this visit will enhance the mutual understanding and friendship between the two sides, and help scale up the cooperation between the two universities with respect to the construction of the Confucius Institute, personnel exchange and student training.

During the visit, H.E. Clare Fearnley also had an informal discussion with representatives from Collaborative Innovation Center for Peaceful Development of Cross-Strait Relations, School of Public Affairs and New Zealand Research Center. After that, she delivered a speech, which was received with warm applause and followed by the session of interaction between her and the students.