The 13th International Underwater Robot Competition (URC) was held in Qingdao from September 21 to 23. The Underwater Exploration Robot Innovation Club of the College of Ocean and Earth Sciences sent four teams to participate in the competition and won one second place, one third place and two second prizes respectively. 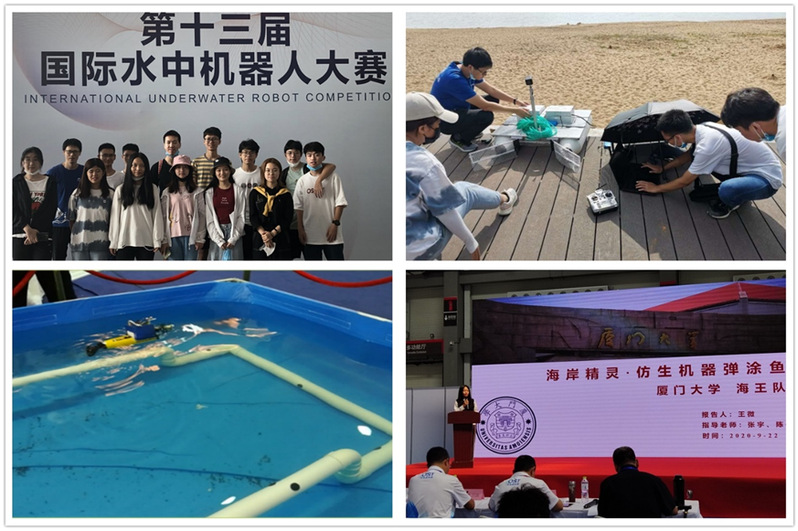 This is the sixth time that the Underwater Exploration Robot Innovation Club of College of Ocean and Earth Sciences has participated in the URC, and the club has won five first prizes (including two champions and two runners-ups), one second prize and four third prizes. This year the club signed up for four competitions: the Underwater Robot Engineering Technology Innovation Design, the Surface Litter Cleanup Competition, the Shallow Water Pipeline Inspection Technology Challenge, and the Deep Water Pipeline Inspection Technology Challenge.

The Underwater Robot Engineering Innovation Design emphasis on the innovative design of underwater robots and the application prospects. Therefore, the club made full use of their marine discipline background and adopted the bionic design concept to design an amphibious robot suitable for mudflat operation, taking the mudskipper as the bionic prototype, which was prized for its ability of mudflat movement that traditional amphibious robots do not have. The Surface Litter Cleanup Competition focuses on the pollution problem of floating litter in small water areas such as artificial lakes, rivers, ponds, and scenic spots, and proposes the need for practical applications of unmanned boats for efficient surface litter cleanup. The club targeted this need and designed a surface litter cleanup boat that is remotely controlled and could detect litter automatically, which detects the water environment with a front-facing camera and find and collect surface litter based on machine vision, achieving intelligent cleanup of surface litter. In the field demonstration session, the surface litter cleanup boat accurately collected and removed all the sea litter in a relatively short period of time. The Pipeline Inspection Technology Challenge focuses on the inconvenience of manual inspection for underwater pipelines, and proposes the prospect of using autonomous intelligent underwater robot fish to inspect pipelines. The club used image vision technology, based on the digital features of the underwater images taken by the robot fish, to complete a round of the pipeline inspection and alert to the oil spill. In the competition, the club's inspection robot not only completed a round of inspection, but also accurately detected all the oil spills. 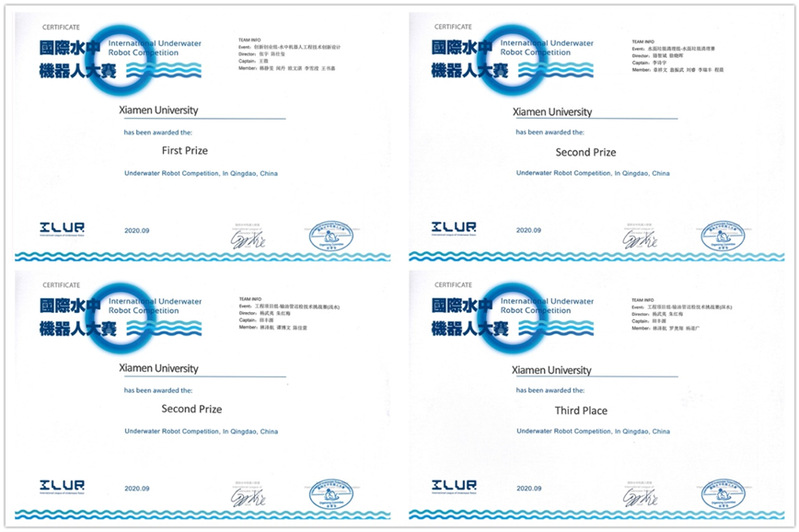 In recent years, College of Ocean and Earth Sciences attaches great importance to the cultivation of students' innovation and entrepreneurship skills, and actively encourages and supports students to participate in various innovation and entrepreneurship competitions related to oceanography. The Underwater Exploration Robot Innovation Club was organized by the College in December 2015 and approved as the Xiamen University Undergraduate Innovation and Practice Platform in September 2016. And its research content integrates many disciplines such as marine acoustics, information signal processing, robot design, machine learning, etc. The club is dedicated to the development of hydroacoustic functions and autonomous movement of bionic robot fish, used in the field of bionic sonar detection, marine life protection, marine environment monitoring. Since its inception, the club has played an active role in cultivating students' innovative and practical abilities, teamwork spirit, and improving their professionalism.

(College of Ocean and Earth Sciences)