On January 10, the National Science and Technology Award Conference was held in Beijing by the CPC Central Committee and the State Council. Xi Jinping, Li Keqiang, Wang Huning, Han Zheng and other party and state leaders attended the conference and awarded prizes to the awardees. Led by Academician Tian Zhongqun, achieved along with Professors Ren Bin, Li Jianfeng, Wu Deyin, and Associate Professor Liu Guokun (now associated with the School of Environment and Ecology), the project  of Electrochemical Surface Enhanced Raman Spectroscopy was awarded the second prize of National Natural Science Award. Ren Bin and Liu Guokun attended the award conference as the representatives of the awarding team. 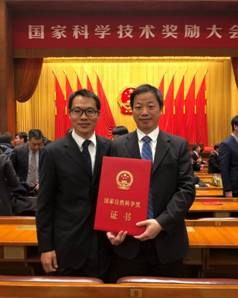 Surface-enhanced Raman spectroscopy (SERS) is a molecular vibrational spectroscopy with ultrahigh surface sensitivity benefited from the surface plasmon resonance (SPR) effect. However, its applications were significantly hindered by the prevailing opinion that the enormous SERS effect could only be generated on roughened gold, silver and copper surfaces. Since the 1990s, the research team systematically have concentrated on the development of the electrochemical(EC)-Raman and non-traditional SERS techniques, both experimentally and theoretically, which greatly expanded the applications of SERS. They achieved the following two world-leading results.

Firstly, SERS effect was systematically demonstrated to present on transition metals both experimentally and theoretically. A series of methods have been developed for fabricating various surface nanostructures to generate SERS effect on transition metal surfaces (mainly platinum and iron groups) with important applications in electrocatalysis. The SERS enhancement are contributed by the electromagnetic enhancement (mainly lightning rod effect) from the surface nanostructures. Some challenging topics, including the adsorption behaviors of water and hydrogen on transition metals have been systematically investigated with EC-SERS for the first time. The research team has become a leading team in the field of EC-SERS. In 2002, the team won the first prize of science and technology among Chinese universities.

Secondly, the shell-isolated nanoparticle-enhanced Raman spectroscopy (SHINERS) was invented. SHINERS led to a breakthrough of the long-standing material and morphological limitations of SERS. SHINERS has now been widely applied in various fields including electrochemistry, catalysis, energy storage and conversion, material science, and life science. This technique has been considered as “the next generation of advanced spectroscopy” and “has opened up a new direction of spectral analysis”. The concept of shell-isolated nanoparticle-enhancement has also been successfully expanded to other surface-enhanced spectroscopies, including fluorescence and second harmonic generation (SHG). With SERS as the core technique, the research team has developed Raman instruments for fast detection enabled by the home-developed fast pretreatment kit, software and control system. The instruments were successfully applied in inspection of food safety and public security. In 2017, they participated in the Food Safety Inspection of the BRICS Xiamen Summit and the accuracy of the detection system was highly recognized by the government departments.