On May 17, the "Touching China" 2019 Award Ceremony went on the air on CCTV-1, and Professor William N. Brown from the School of Management of Xiamen University was conferred the honorary title "person of the year".

The CCTV award speech says, “ Open our hearts, for embracing enhances understanding; drop our biases, for nothing can separate us, even if it is the Pacific Ocean. Between the lines of your letters home, we can read your tales of China and your deep love for this country. Our dear friend from afar, China is forever a home away from home for you, and we all love you ‘cause you always feel at home in China. “ 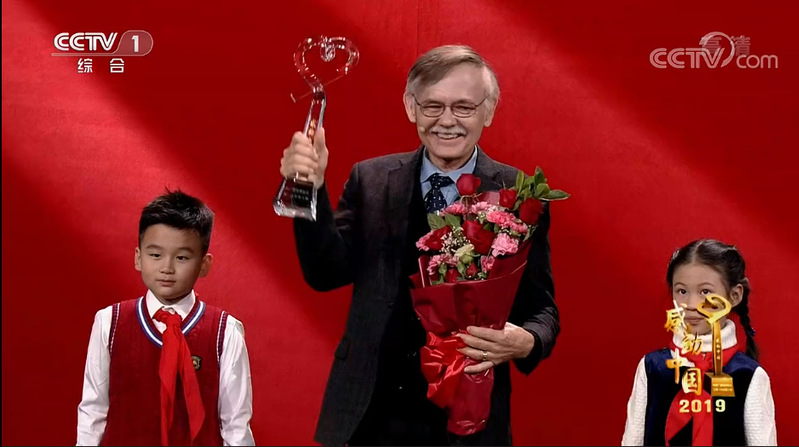 William Brown has served as a professor at the School of Management in Xiamen University since 1988.  In 2002, he applied for permanent residence in China and became the first foreigner to be granted “Chinese Green Card”in Fujian Province. Having been working in China for 32 years, he knows and loves China, and has witnessed the exponential growth of China’s economy. Thanks to his introduction, cities like Xiamen and Quanzhou have earned their places on the honor roll of “International Garden Cities.” In addition, he has also been awarded the Chinese Government Friendship Award and Honorary Citizen of Xiamen.

By the end of 2018, he published a new book Off the Wall: How We Fell for China, recording and recounting, from a unique global perspective, how China has changed and developed over the course of reform and opening up. Chinese President Xi Jinping applauded his “feeling at home in China” and turned thumbs up on “his passionate role in the publicity of Xiamen and Fujian Province as a witness to China’s reform and opening up”.

In his acceptance speech at the ceremony, Brown said, "I don't think I've done anything to touch China. On the contrary, China has touched me." A bosom friend afar brings distant lands near. Charming Brown has been so charmed by China and its development. His stories of China are saturated with such a deep love which has touched each and every one of us.

"Touching China" Award is a mind-nourishing brand program created by CCTV, and has been sponsored by the live broadcast team of the Social Themes Department of the News Center. A multiplicity of voting methods have been adopted to select the year's most impressive and inspirational people and teams. The year 2019 marks the 70th anniversary of the founding of People's Repblic of China, and this annual event is a special tribute to the extraordinary builders of a new China.