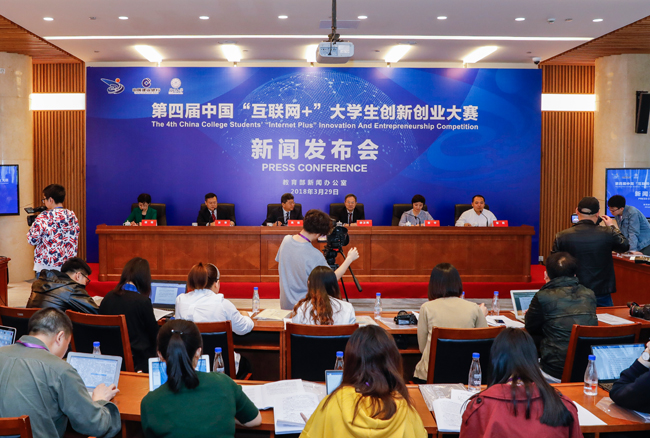 On the morning of March 29, a press conference on the upcoming 4th Internet+ Innovation and Entrepreneurship Competition (hereinafter, the Competition) was held in Xiamen University by the Ministry of Education. Wu Yan, director of Department of Higher Education, released to the media the general information about the coming event. Following that, Xue Weimin, deputy director of Education Department of Fujian Privince, and Zhang Rong, president of XMU respectively briefed the conference on the updates of the preparations that have been made so far for the competition by Fujian Province and Xiamen University.

Wu Yan said at the conference that this time we ought to deliver a contest of greater “breadth, depth, height and warmth”, which shall accentuate such geographical features as the marine silk road, the Taiwan Straits and the sea and ocean that are unique of Fujian Province. In general, the Competition of this year will be distinct for its three highlights: First of all, it's essential to build this competitive event into a platform for international exchanges regarding innovation and entrepreneurship to increase its international renown and influence. To this end, the organizers will need to open more international channels for competing teams from across the world. It is planned to establish a global community of innovation and entrepreneurship named after “21stcentury marine silk road”. Second, it is necessary to carry out the activities of the “Red Dream-building Journey of Chinese Youth” in a broader and deeper way  and integrate the education on innovation and entrepreneurship with the one on morality and politics. For this purpose, the organizers plan to send more university students, entrepreneurs and investors on trips to the old revolutionary base areas or underdeveloped regions where they will bring with them the best brains and resources of the colleges and universities, and do their part in the “precision” poverty relief and rural boom. Third, it is necessary to make a good film, to adapt the inspiring startup stories of college students to the big screen. Such a movie, showcasing the creativity, perseverance, esprit de corps and ambition of the fledgling entrepreneurs, shall be used to pay tribute to the 40th anniversary of the Reform and Opening-up of China.

President Zhang Rong said that Mr. Tan Kah Kee, the founding father of XMU, was a prominent entrepreneur and the history of XMU is also a history of entrepreneurship and hard work. For years, XMU has ensured that the education on innovation and entrepreneurship run through the entire process of its talent training, the fruitful outcomes of which have received full recognition from national leaders and people from varied sectors of the society. According to Zhang Rong, XMU attaches great importance to the preparatory work of the  4th Competition, bringing it up to the highest standard and introducing innovative measures to expand its influence. It is expected that the Competition in the offing will attract an increasing number of players from home and abroad, and shall make new breakthroughs both in scale and quality. Xiamen University will take the occasion of the Competition to initiate the establishment of the “University Union of 21st Marine Silk Road”, host the International Summit on Belt & Road Innovation and Entrepreneurship, and strive to infuse the innovative spirit into higher education. Last but not the least, XMU is pushing for the creation of “Marine Silk Road Innovation Valley”, a platform that will help to turn the creative projects from the Competition into market viable businesses.

There are up to now a cumulative 2.25 million college students who have participated in the annual event since it was founded in 2015. In previous competitions, a large number of high-tech projects with great market potential values sprang up, demonstrating the creativity and hard-working spirit of China's college students of today. These grand gatherings under the banner of innovation and entrepreneurship have opened the minds of the young college students and guided them onto the road of starting their own businesses.