Jiahuai Han: Pyroptosis is driven by non-selective gasdermin-D pore and its morphology is different from MLKL channel-mediated necroptosis

Abstract: Necroptosis  and pyroptosis are two forms of programmed cell death with a common feature of  plasma membrane rupture. Here we studied the morphology and mechanism of  pyroptosis in comparison with necroptosis. Different from necroptosis,  pyroptosis undergoes membrane blebbing and produces apoptotic body-like cell  protrusions (termed pyroptotic bodies) prior to plasma membrane rupture. The  rupture in necroptosis is explosion-like, whereas in pyroptosis it leads to  flattening of cells. It is known that the execution of necroptosis is mediated  by mixed lineage kinase domain-like (MLKL) oligomers in the plasma membrane,  whereas gasdermin-D (GSDMD) mediates pyroptosis after its cleavage by caspase-1  or caspase-11. We show that N-terminal fragment of GSDMD (GSDMD-N) generated by  caspase cleavage also forms oligomer and migrates to the plasma membrane to kill  cells. Both MLKL and GSDMD-N are lipophilic and the N-terminal sequences of both  proteins are important for their oligomerization and plasma membrane  translocation. Unlike MLKL which forms channels on the plasma membrane that  induces influx of selected ions which osmotically swell the cells to burst,  GSDMD-N forms non-selective pores and does not rely on increased osmolarity to  disrupt cells. Our study reveals the pore-forming activity of GSDMD and  channel-forming activity of MLKL determine different ways of plasma membrane  rupture in pyroptosis and necroptosis. 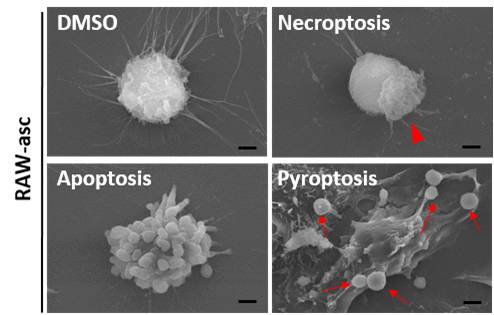