On December 1, 2014, Ada E. Yonath, a Nobel Prize winner in Chemistry in 2009, visited Xiamen University. During her three day visit, she gave an informative speech on "Structural Design of Therapeutics" to 700 students and faculty from College of Materials, Xiamenn University , enjoyed a delicious breakfast with faculty and student representatives, and later led lively round table discussions about her research and findings. In her informative speech, she shared her studies on the structure and function of the ribosome, for which she won the Nobel Prize in Chemistry along with Venkatraman Ramakrishnan and Thomas A. Steitz.

On the second morning of her visit, Ms. Yonath had a special meeting with 20 faculty and student representatives from College of Materials, Xiamen University. Everyone was extremely excited to meet the grandmaster face to face. During breakfast, they had a lively discussion covering topics on research, life, education, various occupations and other related topics. In the afternoon and then again the next morning, Ms. Yonath had round-table meetings with undergraduate, graduate and faculty representatives in which she used simple language to explain the structure and function of the ribosome. Also, she shared her experiences and challenges in her research and, then, was happy to answer more questions about career planning, problems in research and the importance of attitude in scientific research.

As a result of her visit to Xiamen University where she so willingly shared her scientific expertise, thoughts and opinions about her research, science and life, Ms. Yonath has won another very important “prize” from this visit. Hundreds of students and faculty now regard her as their role model in scientific research and will try to aspire to reach her heights both as a scientist and a human being. 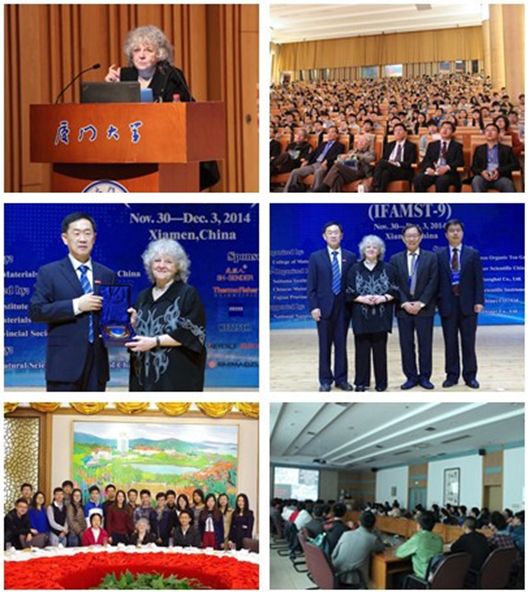 Ada E. Yonath ,born 22 June 1939, is an Israeli crystallographer best known for her pioneering work on the structure of the ribosome. She is the current director of the Helen and Milton A. Kimmelman Center for Biomolecular Structure and Assembly of the Weizmann Institute of Science. In 2009, she received the Nobel Prize in Chemistry along with Venkatraman Ramakrishnan and Thomas A. Steitz for her studies on the structure and function of the ribosome, becoming the first Israeli woman to win the Nobel Prize out of ten Israeli Nobel laureates, the first woman from the Middle East to win a Nobel prize in the sciences,and the first woman in 45 years to win the Nobel Prize for Chemistry. However, she said herself that there was nothing special about a woman winning the Prize.