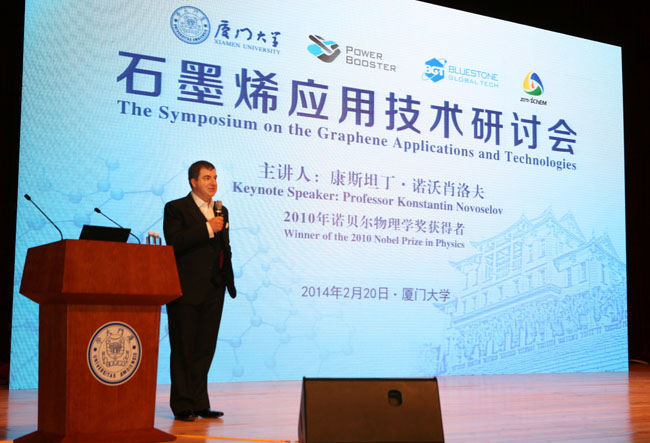 Prof. Konstantin Novoselov, recipient of the 2010 Nobel Prize in Physics, was keynote speaker recently, at the Symposium of Graphene Applications and Technology, held in the Science & Arts Hall of Xiamen University earlier this year. Graphene is a highly versatile two-dimensional new material of great interest to scientists and engineers. Over 900 XMU faculty members and students attended his address, titled, “Applications & Technology of Graphene – Material without Limit.” It was for his research into grapheme that he won the Nobel Prize.

His visit to XMU was coordinated by XMU, Bluestone Global Tech and Powerbooster Technologies. Both Bluestone and Powerbooster engage in the research and development of products using grapheme. Novoselov envisions numerous potential applications in plasmodics, in 2D materials/capacitor, semiconductor/THz/, composites and barrier coatings and membranes, and in consumer goods. He sees an enormous economic and social value in the single atomic layer material - graphene. For example, he anticipates only 5 seconds for cell phone batteries to be charged if the graphene was used in lithium batteries; a foldable touch panel would be no longer a fantasy due to if grapheme were used because it possesses excellent flexibility. 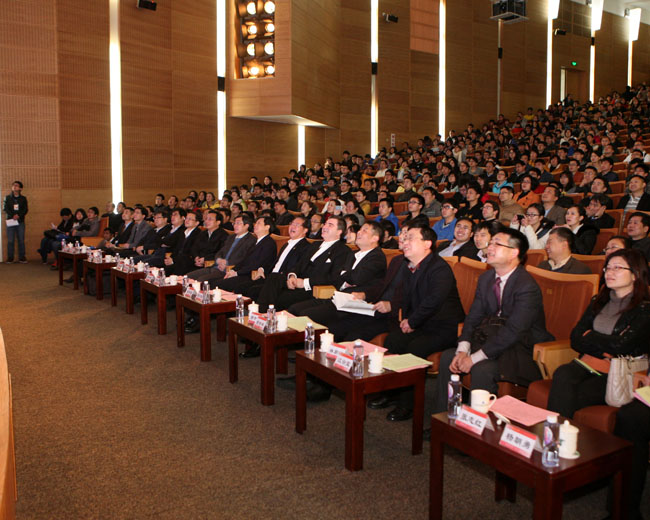 Prof. Jiang Yunbao, the General Secretary of the iChEM and the Dean of College of Chemistry and Chemical Biology at Xiada, introduced Dr. Lai Zhongping, the CEO of Bluestone Global Tech. Dr. Lai presented their work on the latest technology and application of the grapheme. His topic was “Large Area CVD Graphene Production and Graphene Application in Energy Storage”. Yunbao and Zhongping collaborate in research into the grapheme in Li-ion batteries and announced the developments in their work at this symposium. They work with Bluestone Global Tech and Powerbooster Technologies. The goal for scientists working with industry is to greatly improve battery capacity and stability.

Professor Novoselov gave the Nanqiang Lecture, the most prestigious lecture at XMU, and the 6thiChEM lecture with multi-video system shared by such four universities and institution as XMU, FDU, USTC and DICP at four different locations.

Prof. Novolesov and Prof. Lai answered questions from the students at the end. Further cooperation with Prof. Novoselov, Bluestone Global Tech and Powerbooster Technologies in the graphene application was discussed afterwards.

In the afternoon, Xiamen Mayor Liu Keqing, accompanied by the XMU President Zhu Chongshi met with Prof. Novoselov and had joyful discussion on joint establishment of a research institute for graphene study in Xiamen.

Konstantin Novoselov, a Russo-British physicist, is known for his work on grapheme, together with Andre Geim, which earned them the Nobel Prize in Physics in 2010. Novoselov is currently Professor of Physics in the mesoscopic physics research group at the University of Manchester and a Royal Society University Research Fellow. In 2012 he was named Knight Bachelor in the 2012 New Year Honours for services to science.

Together with Geim, Novoselov has published more than 90 peer-reviewed research papers on several topics including mesoscopic superconductivity (Hall magnetometry), subatomic movements of magnetic domain walls and the discovery of gecko tape and graphene.