University of Delaware Day at XMU 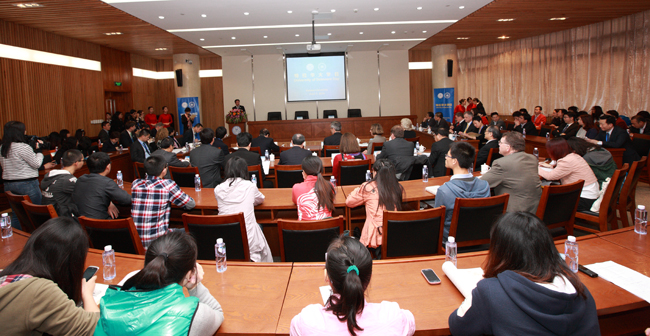 During XMU’s 93rd anniversary celebration, a seventeen-member delegation from a fine university in an American state on the east coast arrived at Xiamen to attend a celebration in their honor. “University of Delaware Day” at Xiamen University took place from April 2 and 3, 2014. 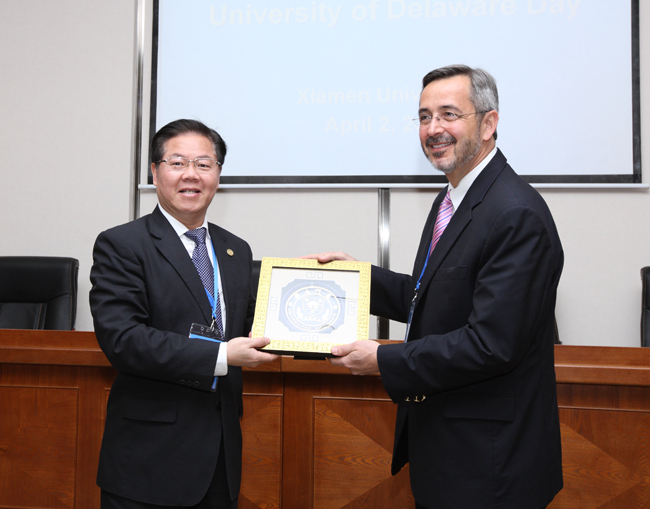 Zhu Chongshi, President of XMU, and Domenico Grasso, Provost of UD, delivered the commencement addresses at the opening ceremony, expressing hope that there would be future opportunities for further cooperation between the two universities, their alumni and the local communities. 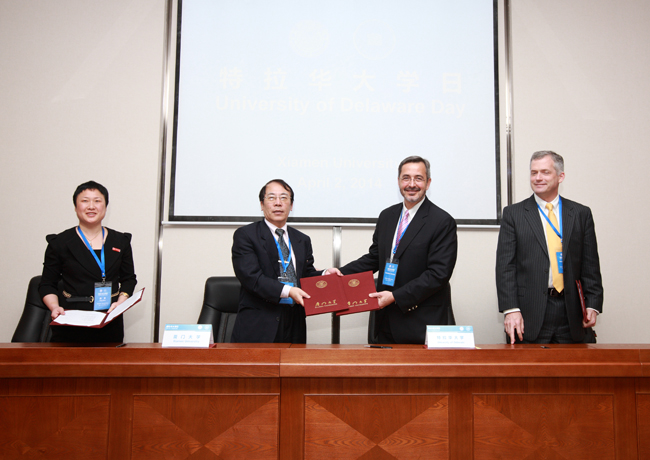 After the addresses, an agreement was signed by officials between colleges of business and management at both universities. The agreement established a joint degree program for Xiamen students to complete a master’s degree in accounting by studying one year at each university.

President Zhu and Provost Grasso exchanged views on cooperation in oceanography, the humanities, chemistry, management and electronic information. Experts from UD discussed research in Ocean and Earth Sciences, Management, and Journalism and Communication with XMU teachers and students.

The 2nd XMU-UD Symposium was held at Xiang’an Campus, featuring speakers from UD’s College of Earth, Ocean, and Environment. Another point of interest for all those attending was the promotion of dual doctoral degrees in oceanography.

The delegation from Delaware also joined a roundtable discussion with XMU faculty and staff who studied management of an American university, during the past two summers in Newark, New Jersey, a neighbor to Delaware. The observers from Xiamen hope to gain a deeper understanding of ways to manage a growing university.

The days’ event celebrated the strong relationship between the two universities, which first signed an agreement in 2007, connecting XMU College of Oceanography and Environmental Science with UD’s College of Earth, Ocean, and Environment.

The past few years witnessed closer partnerships between the two universities. UD’s incumbent president Patrick Harker visited XMU for several times and was awarded the Honorary Doctorate of Management of XMU. Last May, UD awarded President Zhu Chongshi the Honorary Doctorate of Laws during spring commencement, making him the first Chinese president to receive the honor.